In the 1940’s there was a large population growth in Peterborough, particularly in the north end of the city. War time housing and the newly built Brookdale subdivision was putting a strain on the existing St. Peter’s and St. Mary’s schools. The Separate School Board purchased land with the intention of building a school. In 1948 the building of St. Anne’s School commenced and opened the following September, 1949. Father F. K. Malane was assigned as spiritual director. At this time, families of the school and other Catholics living in the area attended St. Peter’s Cathedral. In response to a request of the people, Bishop Berry granted permission to celebrate Mass in the school’s auditorium and thus was born the Mission of St. Anne’s. The first Mass celebrated at the Mission of St. Anne’s was February 26, 1950.

On May 14, 1956, the Parish of St. Anne’s was established when Bishop Webster advised Fr. Gregory Wolff of his appointment as founding pastor. The Parish boundaries were north of Parkhill from the Otonabee River to the Canadian National Railway to the Lindsay line. St. Anne’s was now its own parish detached from the Cathedral. Fr. Gregory Wolff officially took over and celebrated the first Mass in the parish June 10, 1956. The parish had no rectory or church.

In September, 1956 a combined funds canvas with the objective of building a church began. Peter Gagliardi, a parishioner at that time, was one of the volunteer canvassers. He remembers fairs and draws being held to help raise funds. When the campaign ended $150,000 had been pledged.

In early 1957, O’Gorman and Associates of North Bay designed the church and the building contract was awarded to M.J. Finn. Sod turning occurred July 8, 1957.

The church’s corner-stone was laid December 15, 1957. Peter Gagliardi was there. He remembers a clear sunny day and a full parking lot. The workers spread the mortar and Fr. Ray Garvey, with a couple of assistants, picked up and laid the cornerstone in its place. Bishop Webster blessed the cornerstone which contains a time capsule from the students of St. Anne’s School.

The new church was completed, blessed and dedicated June 11, 1958. The total cost for the church, rectory and furnishings was $240,000. In June, 1967 a fiberglass statue of St. Anne was erected in front of the church. Fr. Wolff announced at the end of that year that the entire debt had been paid off.

Towards the end of the 1960’s the changes of the Second Vatican Council started coming into effect. Included among them were the elevation of and carpeting of the sanctuary; the removal of the communion rail; the erection of the ambo and a new altar facing the congregation.

The parish continued to thrive and grow under the leadership of many priests and soon came to include a second school, St. Paul’s. Both schools experienced renovations and additions to accommodate the growth in population.

Many parish activities were established and most met in the house next to the church that had once served as a rectory. The house was small, drafty and mostly inadequate for the needs of the parish. The members of the Quilters’ Group recall those old days in the Old House when it was so hot that they cooked in the summer and so cold they froze in the winter. There was an increasing need for something more suitable.

Finally in 1996, something was done about it and plans were started on the building of a new larger parish centre. Sod turning for the parish centre was April 21, 1997. Thanks to work from over 200 volunteers the projected cost of $1.2 million decreased to $800,000. In September 1997, St. Anne’s had its own large, modern, air conditioned Parish Centre. Now groups like the Quilters, Women’s Group, Knights, Brownies and others have a suitable place to meet and even store their belongings!

Through pledges and a huge fundraising campaign, chair Peter Roach delightedly announced early completion of the mortgage payments. On December 31, 2002 our Parish Centre was completely paid for – 10 years early!

Today St. Anne’s continues to be a flourishing parish with a Women’s Group, Knights of Columbus, Brownies, sports teams, Liturgy Committee and Children’s Liturgy, among others. We are indeed Building Faith, Building Community and Building the Future. 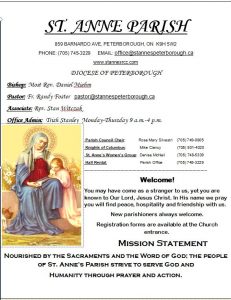